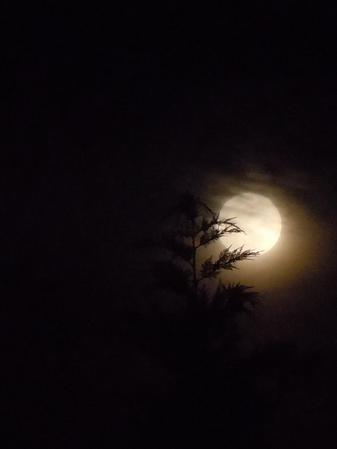 Please read the about the virtue of Courage below and  then follow the links in this section to read about the other virtues that comprise the Nine Noble Virtues.​ 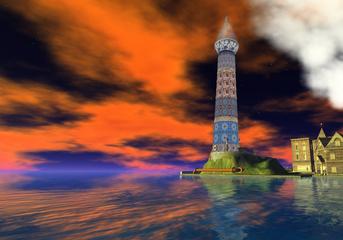 About the Original Lecture Series 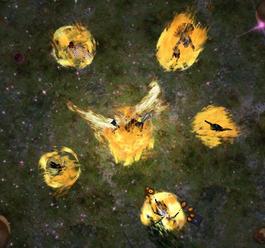 ​​This material was first presented as a series of lectures in the virtual world of Estel Sidhevair beginning on Nov. 5, 2008. These lectures were geared to online community members of the “Fantasy Archipelago” in the Old Virtual grid and in particular to the Elf Circle Guardians who included the ethics of the Nine Virtues in their training to act as mentors and first responders to online trouble for the approximately 1500 members of Elf Circle (EC). Please note that the material is also presented with a distinct mythopoeic approach,  basically written  by and for creatures of fantasy. The original lecture transcript has been modified for a more general audience.

While the Nine Noble Virtues are drawn from Norse religious perspectives,  this introduction and the nine lectures which follow also draw from other ethical and religious constructs from around the world including Celtic,  Hellenic,  and East Indian perspectives.

The original lectures were presented online on Wednesday nights at 8 PM with some breaks for various holidays. They were facilitated by the direct avatar interactions made possible via digital worlds. The lectures were all presented in the main conference area of the community center (Enedh Gwaith) on the virtual island of Estel Sidhevair. In some cases there were guest speakers, where appropriate their remarks are included with the main lectures. Each lecture was followed by a discussion section. These talks at times lasted far into the night,  sometimes growing rather heated.

In virtually every modern Heathen statement of values applied to the 9 Noble Virtues, Courage is listed first. It’s possible that this Norse prioritizing of courage before honor, or even truth, is related to the culture’s warrior origins, emerging from the values and actions for which the Vikings are frequently remembered.

The Elf Circle Guardian class defines Courage as  “a mental state which impels an individual to accomplish some endeavor, regardless of fear and/or danger. ”

The etymological origin of the English word is the Old French  “corage”  which is derived from the Latin cor (heart). To have courage is to have the heart  to face fear, danger or pain as needed in defense of hearth, home, life, livelihood, family, culture or beliefs.

Courage in a  “Northern sense”  is found when one faces fearful adversity without thought of reward or salvation. Both of these concepts are, basically, foreign ideas to the Norse/Germanic religious perspective,  despite tales you may have heard of cavorting in Valhalla or raiding in Britain and Ireland.

In his 1936 lecture “Beowulf: The Monsters and the Critics”, J.R.R. Tolkien discussed this “Northern” ‘theory of courage’ remarking:

“It is the strength of the northern mythological imagination that it faced this problem, put the monsters in the centre, gave them victory but no honour, and found a potent and terrible solution in naked will and courage.  So potent is it, that while the older southern imagination has faded forever into literary ornament, the northern has power, as it were,  to revive its spirit even in our own times. ”

As we are conducting an exploration of ethics, virtues and values it’s important to examine the varieties of courage that are possible--both physical and moral. In physical courage, one acts rightly in the face of the possibility (or actuality) of physical hardship, pain and death. In moral courage one stands for what one knows is right even when one risks social shame, exclusion, gossip, scandal, disappointment, alienation and exile.

There is a third sort of courage known as civil or social courage which to some extent straddles physical and moral courage. This social courage is usually defined as (and by) the acts of individual citizens (alone or in groups) who stand up against evil or injustice despite the likelihood that their actions may lead to banishment, loss of reputation, imprisonment, injury or death. Having the heart to stand against social atrocities (the resistance in the Warsaw Ghetto), the heart to stand for political freedoms (against the tank in Tiananmen Square), and the heart to speak out against tyranny, (Civil Rights Movements), authoritarianism,  and lack of representation (Boston Tea Party), requires courage as a primary ingredient.

I mentioned before that at times I would be touching upon related “lists“ and ways of organizing virtue. As with Norse Neo-Pagans’ prioritization of courage as the first of the Nine Noble Virtues, in the Hindu scripture of the Manusmruti, courage is also placed first in the list of the ten Laxana (characteristics) of Dharma (religion). Dhairya (courage) is followed by Kshama (forgiveness), Dama (tolerance) Asthaya (avoiding theft)--with the related nine virtue parallel being honor; Indriy Nigraha (control of the senses) (the closest nine virtue parallel here is probably discipline), Shouchya (cleanliness); Dhi (intelligence); Vidhya (knowledge); Satya (truth), and Akrodh (avoiding anger) --with  the Nine virtue parallel best seen also in discipline.

I think it is very revealing that the word courage comes from the word for heart. As we know, the heart is often associated with the ability to love. The Tao Te Ching describes courage as emerging from love. The original characters can be translated as “loving causes ability brave.” In the classical Eastern fondness for duality, it goes on to point out that “One of courage, with audacity, will kill. One of courage, but gentle, spares life. From these two kinds of courage arise harm and benefit.”

Also interestingly, in place of a yin yang approach to virtues (and of appeal to we Faelf who by our very existence bridge differences), Aristotle described a mean value in virtues that exists between  two extremes. In his extensive discussion of courage in his Nicomachean Ethics he describes courage as the midline between recklessness (the vice of excess) and complete inertia, cowardess (the vice of deficiency). He points out that to approach a chosen path of action requiring courage one must correctly evaluate the situation. He explores the principles underlying such evaluation, the types of action one can take, and the choice to be employed.

Returning from the Aristotelian mind and logic to the heart again, it is interesting that like Latin, the Brythonic (Brittish) languages (like Welsh, Cornish, Breton) also use heart 'calon' ('kalon'/'kolonn') to mean courage. The Celts, like the Norse, were a warrior culture, and therefore straddled the dualism the Tao Te Ching describes by perceiving courage as a heartful bravery. This bravery is inspired by resolve and an enduring spirit and strength in adversity. Aside from bravery, words that come to mind when considering courage include will, fortitude, and intrepidity.

The Nine Noble Virtues all overlap and interrelate. Courage relates in particular to the virtue of self reliance because it involves the power and will and intrepidity to carry out the appropriate and effective response to a challenge that requires us to take action. Sometimes, such challenges are dangerous and the response may even involve risk of death, in that case courage draws upon that virtue, emotion and belief in ourselves which emboldens us to persevere. So courage also relates to the virtue of perseverance as one finds a way to carry on even in the face of frightening odds. In our daily lives today, many of us do not have to find the courage to stand in front of a tank, or draw a weapon to defend ourselves or our loved ones. Instead, we often have to find courage in the face of the ways in which modern society challenges our values.

Honor is increasingly seen as inconvenient to modern cultures. The breaking of rules, even at great cost to another, is encouraged and justified by the rewards and prestige attached to  “getting ahead ”. In these cases, our courage is often revealed when we speak out, when we do not bow to what we know is wrong, and when we do not hide what we are in the face of fundamentalist hatred of what is different. Courage is also expressed and shines in  “the little  action” which can be as simple as risking alienation by choosing not to laugh at a cruel remark, or speaking up rather than remaining silent in fear of being branded a trouble maker.

What does courage  mean to a creature of fantasy?

Certainly in our faery tales and our heroic stories we see the importance of courage. The courage of Sam and Frodo to walk into Mordor with the One Ring comes to mind. Or the courage of a resilient and united resistance to tyranny as the outnumbered races of Middle Earth--Elf, and Dwarf, Ent and Halfling, Eagles and Men stood up to overwhelming odds. In Fantasy, the basic tenet involves courage. What we admire about our heroes is that very courage in the face of death or insurmountable odds. And it’s often “the little guy” who has the courage to struggle forward holding up the phial of Galadriel when all he loves is believed lost and the path before him is dark. It’s about the young Harry Potter standing up to Voldemort, or even something as simple as the brave rabbits Fiver and Hazel in Watership Down who overcome all that stands in the way of what they know is right. Interestingly, the most renowned authors of the fantasy genre possessed this courage. Tolkien endured ridicule and intense criticism for his work when it was first published. Robert Howard wrote what he felt and believed in despite lack of reward; more recently, J. K. Rowling defied conventional wisdoms and stereotypes when she wrote her way out of poverty and homelessness as a single mother.

Returning to our World of Fantasy itself, when do we creatures of the Fantasy Continent need courage? When we question rumor? When we sidestep drama? When we politely support dialog? When we face griefers attacking our lands? The Elf Circle Guardian training points out that knowledge of the appropriate action to take dispels fear.

In our own lives, and in any world we wander, we require courage to strengthen and embolden our spiritual and ethical paths. Courage shines a light upon our actions, provides ethical and moral justification for our choices, and allows us to be effective and to have confidence in ourselves. And now I hope you will have the courage to stand up and share your knowledge or ask me some questions, and that I will have the courage to admit when I don’t know the answers. 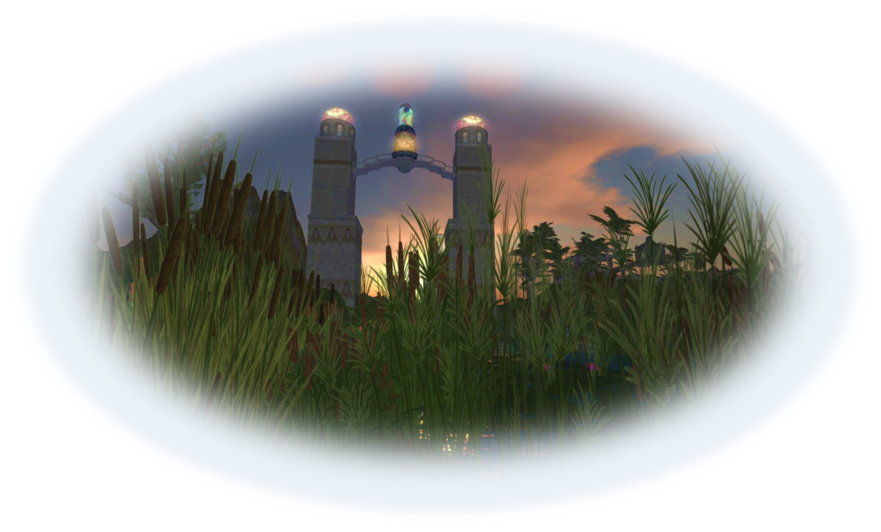